Moscato: where the past meets the future in the Canelli hills

The landscapes and traditions of Monferrato near Asti are so closely linked to Moscato that the expression of this grape variety cannot be separated from its geographical location.

An aromatic grape which has been widely grown across the Mediterranean since ancient times, its name is derived from the Latin “muscum”, meaning “musky”, in reference to its aroma. For centuries, this corner of Italy nestling between Cuneo, Asti and Alessandria has provided Moscato with the ideal growing conditions thanks to its unique combination of geology, climate and environment. 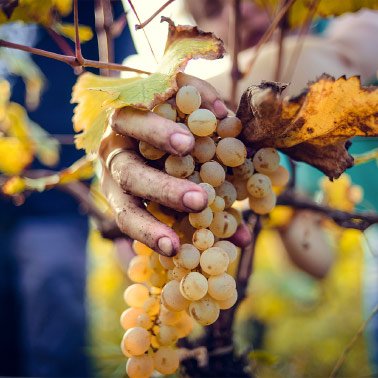 It is a traditional wine, one which farmers have always produced. Over time, Moscato has evolved and become more refined thanks to the ingenuity and know-how of vine growers but also as a result of modern technology, which has made it possible to control temperatures and maintain the cold chain so that the product can be stabilised, optimising the laborious and repetitive must filtration processes and improving storage and transport.

A decisive point in the history of this grape variety came with the introduction of Piedmont spumante in the second half of the 19th century, applying the techniques used on champagne to the Moscato grapes that were typical of the hills around Asti. Alongside the fame of spumante, Moscato also made a name for itself in markets outside Italy, becoming the jewel in the crown of Piedmont wine-making around the world.

Honoured with prestigious DOCG status in 1993, today Moscato is particularly enjoyed abroad, in the USA and in the Far East, in constant evolution and breaking free of the confines of an “occasional” wine.

Sweet but not sickly, it has intense floral and fruity notes and musky tones; its palate and bouquet both recall wisteria and lime, peach and apricot, with hints of citrus and lychee. It is traditionally paired with pastries, biscuits, fruit tarts and cakes such as panettone. Also worth trying is the unusual pairing with savoury dishes, particularly the spicy food typical of Indian cuisine, to balance and reduce its intensity, or blue and other mature cheeses.

In the hills of Ceirole, near Canelli, is the original centre of Villa Giada, with the wine-making cellars. It is here that our vines of Moscato Bianco di Canelli are grown, at an altitude of 320 m above sea level.

It is in the hills of Monferrato where the history of Moscato has been written: the first Italian spumante was created here and the area still offers new opportunities to move this wine forward into the future. In 2019, the Consorzio dell’Asti e del Moscato d’Asti cooperative started the process of having a new denomination recognised with its own production rules. This was the dawn of “Moscato di Canelli”.